skip to main | skip to sidebar

To all my blogging friends I wish you a very happy new year filled with good health and happiness.
I am looking forward to a better year myself with hopes of reaching you with lots more creative efforts for you to see.
Take care and  God Bless 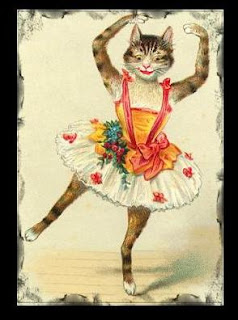 Posted by Maggie R at 9:25 PM 4 comments: Links to this post

OK OK I KNOW IT HAS BEEN TOO LONG

Hello dear friends...I am so sorry it has been so long since I posted.
Too many things going on, but here I am at last.
We became GREAT GRAND PARENTS a week ago to a darling wee girl named Raya. More about that later.
First I wanted to show you what my offerings were in the gallery show  so here 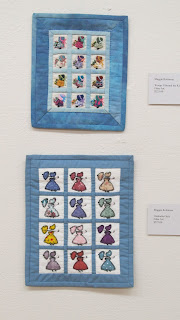 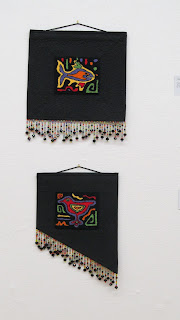 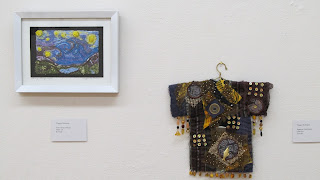 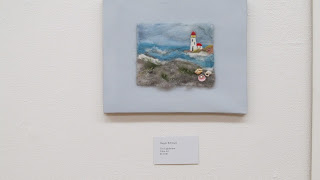 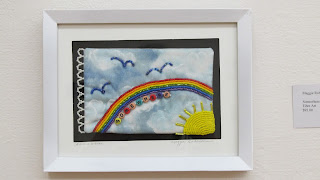 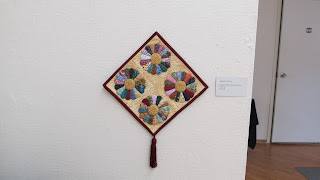 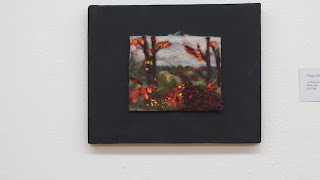 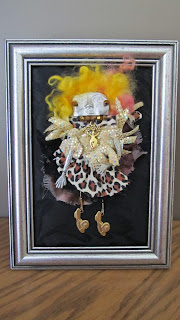 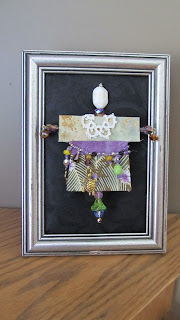 are the pictures
I'm afraid between Blogger and having to do this on my old computer since I don't know how to do this on my Windows 8, I could not write beside each picture to explain it. The first pair of mini quilts are 6"x9" the little sunbonnet Sue blocks are 1". I named it "Woops I Shrunk The Kid" The 2nd quilt is a familiar pattern called Umbrella Girls. I have a bed sized one like this.
The second set are Molas which are needle punched and then beaded.
The next picture has 2 pieces in it, the one is a beaded piece called "Starry Starry Night" from Vincent Van Gogh's painting. It is 4"x6"
the second piece is a miniature kimono done in black wool and embellished with beads and special bits and bobs. The next one is a seascape with lighthouse done in wool rovings, with embroidery and beads.
Next is another beaded piece 4"x6" called "Somewhere" from the song Over the Rainbow,
then there is a dresden plate quilt which is 6"x6" I named this one "Dinner For Four"
Next is a fall scene of the woods and leaves falling from the trees. It is done with wool rovings, beads and threads. These are my art doll pinsmy art doll pins which I mounted in a silk covered frame to keep them when not wearing them. One is a "Wild Woman" and one is an oriental design.
Hope you enjoyed seeing these pieces. I was very excited to learn some of the pieces were sold. Next I will try to blog about the new great grand baby and the quilt I made for her.
Posted by Maggie R at 10:15 PM 5 comments: Links to this post 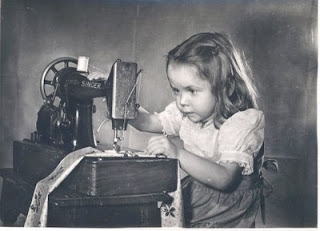 I saw this video while I was surfing the web and am totally impressed with the application.
I hope you enjoy watching and let me know what you think:)
Posted by Maggie R at 1:39 PM 1 comment: Links to this post

Miniatures by Maggie Robinson and 3 others 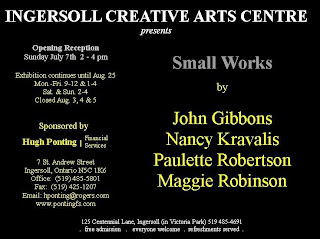 Hello everyone...
I have been getting ready for an opening of "SMALL WORKS"
A collection of work from the 4 artists above.... me being one.,,
Hope anyone in the area will come and say hi..
Thanks so much
Maggie

Posted by Maggie R at 8:40 AM 3 comments: Links to this post

I'm Dancing as Fast as I Can with an Update

Hi to all my followers..
I can't believe how quickly time passes. 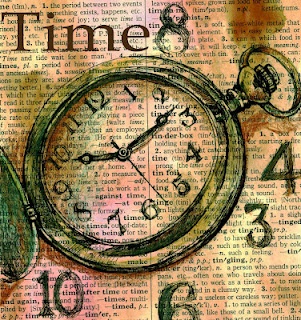 I feel I am dancing as fast as I can....
So much to do.
I had a very successful Studio Tour...
No pictures my camera ran out of batteries! darn!

Had a fun day trip with my Fibre Art Group.
We went to Fergus, Ont. to see the Thread Works display
held at the Wellington County Museum.
It was fabulous.. there again no pictures but check out the links to see it all
We then went to see the Grand National Quilt display in Kitchener, Ont.
The quilts were WONDERFUL.
We had a lovely lunch and then visited a quilt shop for some retail therapy.

I  am now getting ready for a 4 day retreat
with my Mellow Yellow  girlfriends.
It is 10 minutes from the lake so that will be heavenly..
Maybe an opportunity for a walk on the beach
Lots of sewing, eating ,chatting, and a good time for sure..
Hope to have some pictures to share next week when I get home..
(will be taking extra batteries for my camera LOL)
Later dear friends
Posted by Maggie R at 7:12 PM 3 comments: Links to this post 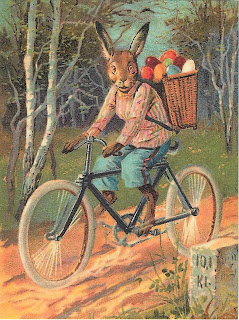 THANK YOU  to all my followers  new and old..
I appreciate your following and all the comments you take time to leave... They always make me smile..
The winner of the bracelet is "Dolores" from the blog True Blue Canadian.."
CONGRATULATIONS"
Please email me with your address Dolores and I will get your bracelet mailed first thing  this week.
I hope you enjoy wearing the bracelet...:)
Meanwhile I hope everyone had a very Happy Easter..

TIME FOR A GIVEAWAY

Hi and greetings to all my followers...
I have promised a giveaway for ages and just was too busy to get to it..
Here's the way for a chance to win..
Become one of my FOLLOWERS(for one chance) and  ADVERTISE the draw on your blog (for 2 chances)and your name will be included for a chance to win this gorgeous bracelet.
Followers ... be sure to advertise on your blog for an extra chance to win..
It is made up of beautiful pale pink crystals along with silver lined seed beads and a silver closure.
I made several of these which I sell for $65.00 and 25% of each sale goes to Breast Cancer Research.
I decided to give one away so good luck to each of you.
The draw will be held on Easter Sunday 2013.
Thanks for entering 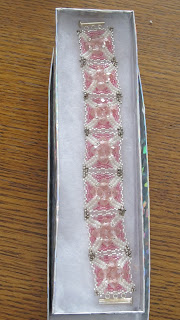 Hurrah, Got the quilt top to-gether..
I am debating weather I should add a  border.It is a wall hanging size. I'm thinking it needs a border although the book doesn't insist.. what do you think?
It is hand appliqued and machine pieced. 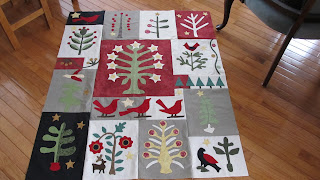 This is the book and all the blocks.. 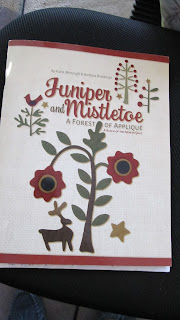 Posted by Maggie R at 3:39 PM 6 comments: Links to this post 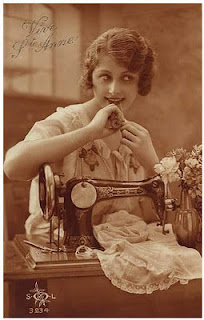 I'm still here and feeling very guilty about not posting. please forgive me
I have been working on a quilt which I planned to have done for Xmas but...sigh.... didn't get there ..
I finished the appliqueing  the blocks and trimmed them to size..
To-day I shall lay it out and sew it to-gether. I will take a picture at that point so you can see it...so....stay tuned.
Have yourself a happy creative day and I will see you later..
Posted by Maggie R at 8:17 AM 2 comments: Links to this post 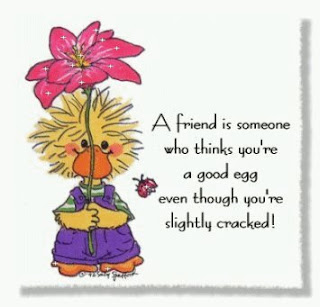 Hello dear friends..
I just wanted to touch base and let you know I am still alive....AND ...SLIGHTLY CRACKED.
I have spent the whole day with my new computer and as far as I have learned...WINDOWS 8 SUCKS!!!!!!!!!!!!!!
I guess it will take time to learn and I have to learn to be patient but oh my!!! My XP was so nice....sigh!!
Anyway please do not give up on me as I am stubborn and will be normal again soon I hope...sigh
Meanwhile sending big hugs and hope I get some back:):):):)
Posted by Maggie R at 7:25 PM 5 comments: Links to this post

This is so cute ... tell me if you made it.. You show me yours and I'll show you mine :)
Check it out at this link Posted by Maggie R at 9:59 AM 2 comments: Links to this post

Old Fashioned Name Generator
Your fairy is called Columbine Goblinwitch
She is a bringer of riches and wealth.
She lives in mushroom fields and quiet meadows.
She is only seen in the enchanted moment between sleep and waking.
She wears lilac and purple like columbine flowers. She has gentle green wings like a butterfly.
Get your free fairy name here!

You are The Empress

The Empress is associated with Venus, the feminine planet, so it represents, beauty, charm, pleasure, luxury, and delight. You may be good at home decorating, art or anything to do with making things beautiful.

The Empress is a creator, be it creation of life, of romance, of art or business. While the Magician is the primal spark, the idea made real, and the High Priestess is the one who gives the idea a form, the Empress is the womb where it gestates and grows till it is ready to be born. This is why her symbol is Venus, goddess of beautiful things as well as love. Even so, the Empress is more Demeter, goddess of abundance, then sensual Venus. She is the giver of Earthly gifts, yet at the same time, she can, in anger withhold, as Demeter did when her daughter, Persephone, was kidnapped. In fury and grief, she kept the Earth barren till her child was returned to her.

What Tarot Card are You?
Take the Test to Find Out.

Your fairy is called Columbine Goblinshimmer
She is a bringer of riches and wealth.
She lives in mushroom fields and quiet meadows.
She is only seen when the first flowers begin to blossom.
She wears lilac and purple like columbine flowers. She has gentle green wings like a butterfly.
Get your free fairy name here!